From a global outlook, there is no debate about it. Google has a bigger lead over Apple, Microsoft, and the recently faced out Firefox OS. Google maintains this lead in not just having the most popular mobile operating system; it also has the most widely used apps.

Even when you look at high-end consumer market like the United States, where you expect to find an enormous collection of Apple fanboy clubs; Google mobile OS and its app still outshine the competition. There was a recent survey done by Nielsen on mobile apps consumer market in the United States which tabulated their result in the following chart: 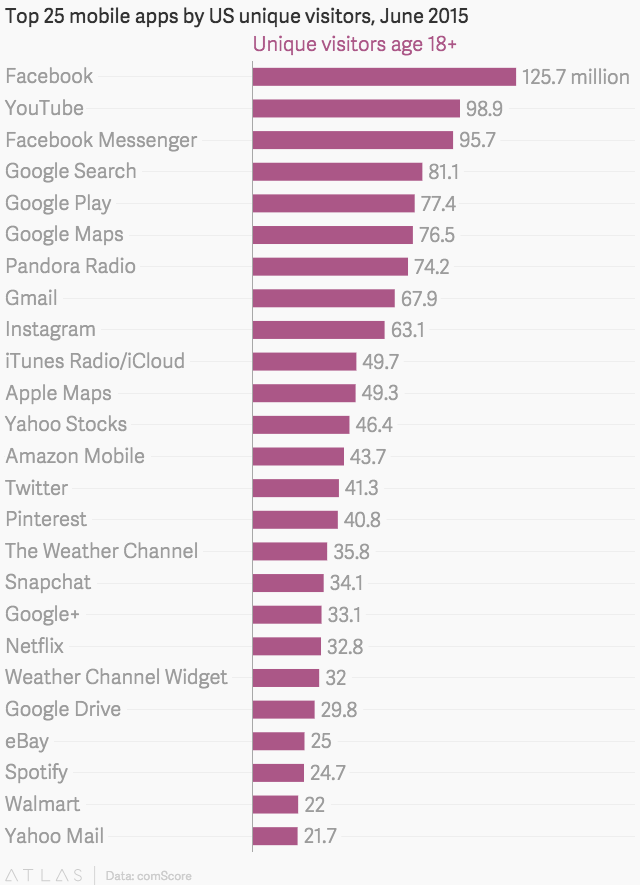 Looking at the top 10 most popular apps in the US, Google has five out of ten, followed by Facebook with three out of ten and Apple with just two out of ten:

The stats on Apple Music app as listed among the top 10 most popular apps in the U.S. does not make clear sense. Barely three months ago, in October, Tim Cook was quoted having said that Apple Music has 6.5 million paying subscribers; and several few millions of users on a free trial plan.

Looking at the Nielsen chart above, you will see the vast difference between Cook’s figure of 6.5 million premium users and few several million trial users, with Nielsen’s 74.2 million users. Maybe this confusion is as the result of Nielsen counting all the people that opened the app while Cook’s figure is strictly on the people that subscribe to the service (paying a minimum of $10 per month) and those on a free trial plan.

When you look at it from that point of view, then Apple is even in a more precarious position with as far as listing the most popular apps is involved. Apple’s apps could be way less popular than the Nielsen’s survey wants us to believe.

In other Apple news, here is a list of the best performing Apple apps for the year 2015.

Kenyan citizen with a passion for writing for as long as I can remember. In my spare time, I like to read and blog on what's happening in the technosphere.